Getting to and living on the Isles of Aran

The Isles of Aran is located off the coast of mainland Ireland and they are beautiful but rugged places. The three main islands are Inishmore, Inishmaan, and Inisheer. It is thought that there are around 1,250 people in total living on the islands and tourism numbers dramatically increase in the summer months.

Many of the traditional Irish traditions including the language have been preserved on the islands and they are a Gaeltacht area.

The way in which people travel to the island has changed over the years with the most common mode of transport a traditional Currach which was a boat that would be created with a wood frame and an animal hide or skin stretched out over the area of the boat. You would definitely want to be wearing Men’s Aran Sweaters for the journey. Interestingly you can still Shop Men’s Aran Sweaters today and they all come in the traditional patterning that we have grown accustomed to from this historical garment. 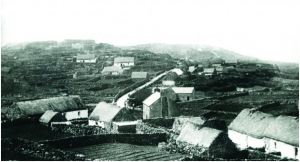 Houses on the islands are arranged in what is known as ‘Clachan’ or ‘Farm Clusters’. There are small villages of people whose homes were located close together and they farmed the land together as families. These households became incredibly close and this helped to create a sense of community between the groups and this helped especially during harsh winters and difficult times such as the Great Famine that swept across Ireland.